As already told in my introduction thread, together with a friend I rescued a dutch Princess 1800 from 1978.
The car was standing since 2010 (according to the last MOT) and we took it from a garagebox in Amsterdam.
When found, the suspension had sagged on the left side. After pumping it up, the car stays fairly horizontal. Ofcourse, all gas has gone so there's no suspension travel, and they will need regassing.
At the rear, the righthand displacer is 'recent', the lefthand rusty and old. There's a NOS displacer with the car.

After a day of tinkering, the B engine runs on gasoline and on LPG, the sticky clutchplates were freed, and we had a driving car. Brakes are OK.

Of course this car is a real restoration project: there is a lot of rust, front valance mostly gone, rust under the paint in bootlid, rear wing under the tankfiller, on the roof, and in the front wings. The paint is severely discoloured. But structurally it all looks fairly sound, sills are sound, engine bay and bulkhead are rustfree, underneath there's just a small patch in the righthand sill/floor. We think it maight sail through a dutch MOT without too much effort.

The colour of it, where not faded, is amazing and looks to be it's first paint. Bright red metallic, almost like a candy paint. So, here are some pictures. More can be found (and will be added) at https://www.flickr.com/photos/apae01/al ... 5026985293
Top

From a little distance, it looks OK. Note the colour is all over the place... 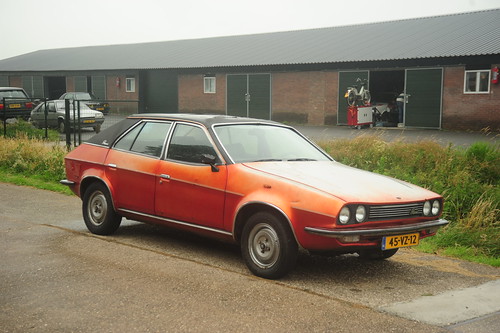 In thefull size picture on flickr, you can see the rust easily. 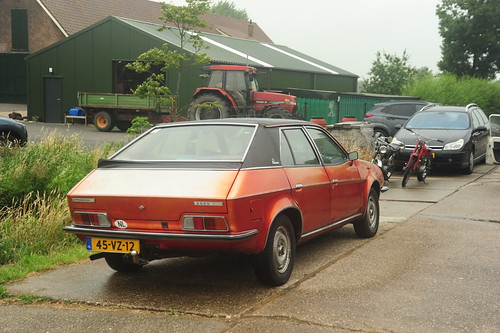 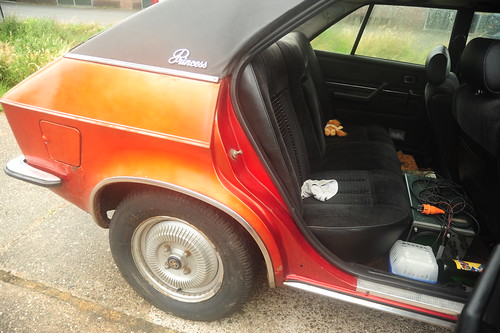 ...and under the bonnet. Any ideas on paint colour? If this was a repaint, it has been done really well. Looks everywhere like it's first paint. 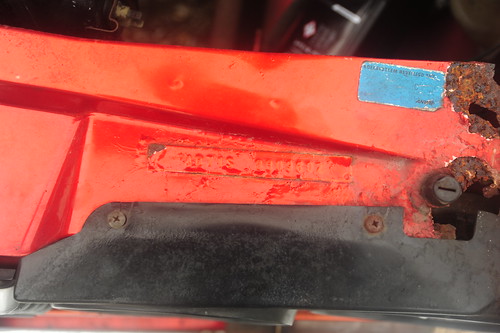 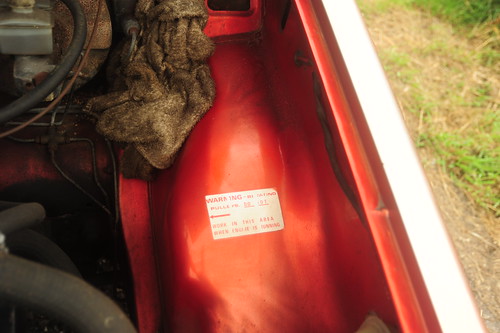 Even under the vinyl rood, it has the same colour. And yes, this will need some work... 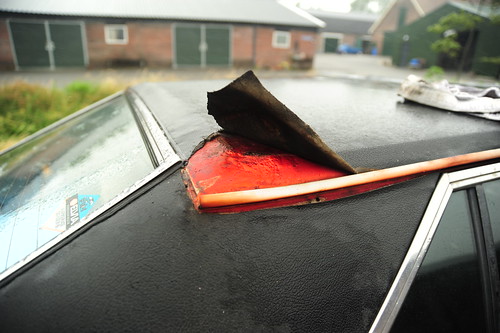 I'm not very good at identifying colours from photos but surely that colour is Reynard Metallic. The slam panel does looks much redder but that has obviously been resprayed.
Martin
Club Treasurer

My friend is sure it's not Raynard: he also owns an Allegro in Raynard. That is really a brown gold, the Princess is much redder.
When the opportunity comes, I'll take a picture of both cars together. That will show the difference and maybe act as a reference for the colour: it indeed is difficult to judge from a picture.
Top

Wanted to take a picture of the Princess next to the Allegro to show the difference in colour, but the Allegro currently is locked inside the garage by a Rover 25 we're dismantling. In two weeks time that will be gone and we can take more pictures.
Top

The colour on the door shuts doesn't look too far from Rover Nightfire Red, which is a metallic red with a lot of gold/orange in it, so it looks like anything from a dark red through to a bright orange, depending on the light and the camera taking the picture. That said, Nightfire is more prone to lacquer peel than it is to fading so it's probably something else.
Top

I must say it all sounds/looks like it has had an extensive engine out respray in the past albeit they surely wouldn't have resprayed the D post & roof. However, I can't make out the colour on the roof where you've peeled back the vinyl either!

As usual, I am no help whatsoever.

With regard to one of the other cars you've acquired I noticed somewhere else that one of those was thought to be blaze. My own pre-production Wolseley is in blaze but that colour never went into production. It is more likely to be Vermillion (or vermilion as BL spell it!) which is in my opinion a nicer more vibrant colour than blaze, That said, I'm probably wrong about that as well!
Martin
Club Treasurer

This 1800HL is the same colour all over, so when this was a respray job, it's far more thorough than I've ever seen before. Nowhere on the car a previous colour can be seen: not inside the boot, not under the vinyl roof, not under trim, etc. It's really all the same colour, which indeed looks a bit like nightfire (but isn't: my dad had a nightfire Montego).

The Princess2 2200 mentioned as blaze is another colour then: a club member said that and I assumed he was right. It is a solid, non-metallic orange. As it is a Princess2, that one could still have the tag on the slam panel.
Top

It sounds as if a Heritage Certificate would be a good investment! That should give you the build date, colour and trim, key numbers, etc

And you would be supporting a worthy cause, too

There is a possibility that European markets had their own colours made available. Also, with the car having the black (UK market) HLS interior and the vinyl roof, but not the HLS dashboard, it is possible that specifications for other markets were different.
Princess 2 2000HL, Reynard metallic
Princess 100 Club Special

The mystery of it's colour was solved today. It turns out to be the best respray I ever saw after all!
However, had we cleaned out the boot earlier, and looked under the carpet there, we would have found an orange colour. So it probably started life as a vermillion car, and gained the vinyl roof only after the respray.
Top

It is strange that for such a good respray they didn't remove/mask up the chassis number plate and just resprayed over it. (I tried to copy that picture so it was on this forum but couldn't!) That's why I was convinced that it had been resprayed.

Next question has to be; what colour are you going to go for the restoration?!
Martin
Club Treasurer

It'd be nice to do it in the respray colour, it's really quite striking, if only you knew what it was.
Top

IF I were the one to restore this, it would probably get the candy red from the respray. Honda moped Candy red is very similar, and we also have several old fourstroke Honda's, so that's fairly easy to come by.
However: there are three Princesses to be rescued, this one just happens to be the first we actually picked up. Only after we have compared all three, we'll decide which one to keep. That vermillion 2200 also would be nice... Later this month we will know more (and have pictures of the others).
Top

Yesterday, my friends did all the work to free the other two Princesses from their resting place. I had to work during the day and joined them around three o'clock.
As found, a few weeks ago: 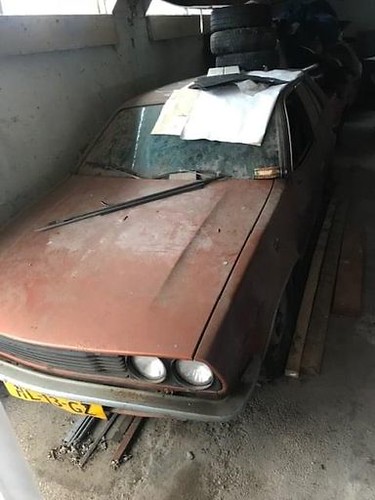 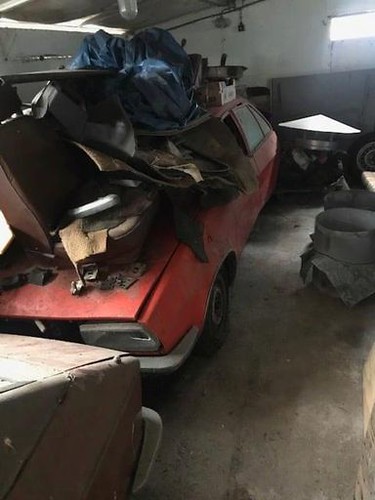 When I arrived, I was greeted by three men taking a break in the shadows, and two Princesses sitting outside, surrounded by lots of parts: 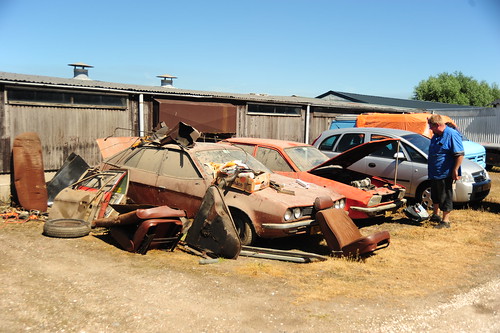 The O-series cars turns out to be a 2000 automatic, but is the worst of the three. Parts car or brave restoration, front wings are not bad. 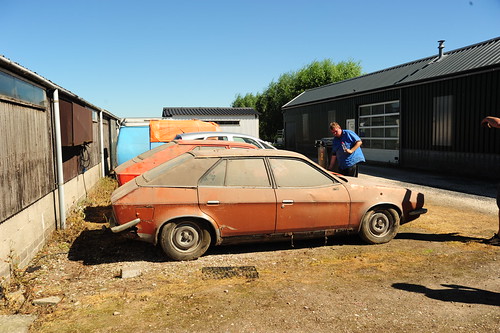 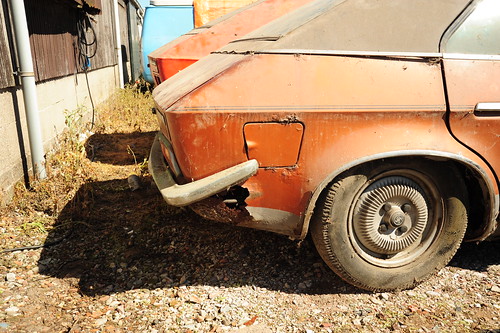 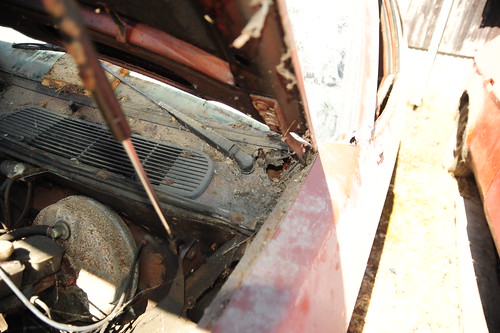 The 2200 is a manual, and not too bad. It has been partly stripped, but most parts seem to be with it. The shell looks not too bad. 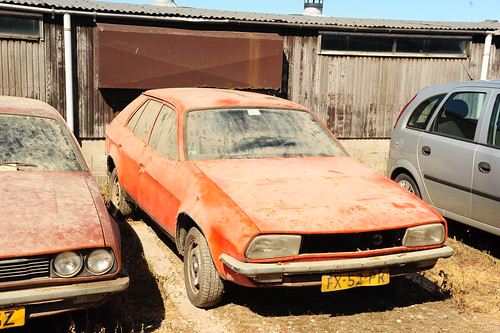 We brought a suspension pump in the hope to get them on height. With the 1800, we learned that helps in loading them on an trailer. With the 2200 we succeeded, the 2000 however had a leak somewhere in the righthand circuit, so we left that alone. 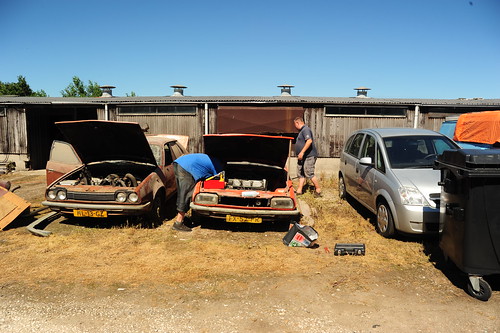 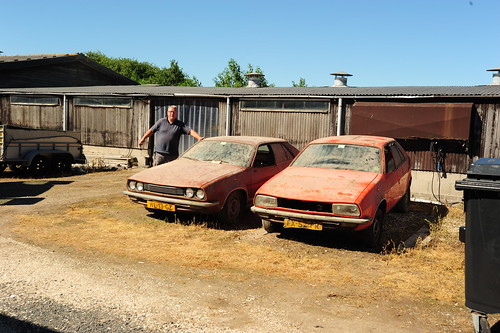 Today, both cars will be transported across the country (not that far in the Netherlands...) to our storage barn.
Top

That's what I like to see, a group of friends all working together!